Week 1 - The community is standing up 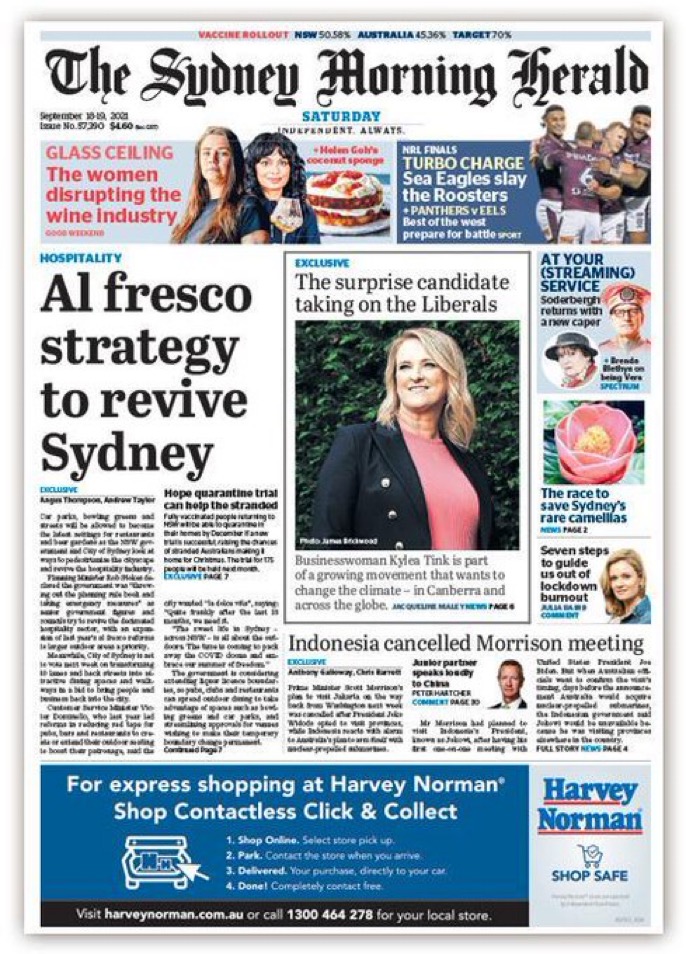 It’s a little surreal to think, this time last week, I was on a zoom meeting with the incredible crew that are at the heart of North Sydney’s Independent still trying to work out how we would begin to reach deeper into our community.

While I had already spoken to Jacqueline Maley at the Sydney Morning Herald like any media story, we didn’t really know how it would go. Jacqueline had been tough. She asked the questions that cut through to why I am running and who I am. Who was “behind me” she asked? To which I explained a community and my conscience. “Why now?” she asked. To which I answered because I honestly believe this community wants us to do better, that our voices deserve to be heard fully in Canberra and I don’t believe they currently are.

The electorate of North Sydney is the second largest in the country. We are a vibrant and diverse community which draws on people from all backgrounds and across all ages. We are thinkers, doers, feelers, leaders and achievers and yet our voice in Canberra is currently lost to a party system that means when North Sydney votes, our vote matches that of Barnaby Joyce.

In the seven days I’ve been overwhelmed by the support we’ve received. People have messaged me, stopped me in the street, shared stories with others – all of which have essentially been communicated as “thank goodness – we finally have an option.”

Some people say we’ve touched a nerve. I think it’s simpler than that. We’ve really just let people know someone’s truly listening – to them. That as an Independent I recognise it’s their voice, their thoughts, their feelings, their ambitions, their concerns, that it would be my job to represent. Without compromise.

It’s a huge responsibility and not one I have stepped into lightly. But now I’m here I just want to say thank you to everyone that has already reached out to declare they’re in. Because at the end of the day, it’s not really my running that matters. It is the fact that our community is standing up and saying we can “do better”.  KTx

Week 34: This week will decide our future

This is it, North Sydney — the final week that will shape Australian politics for the next three years and beyond. If you want a strong, Independent voice for our community in parliament, now is the time to use your voice to advocate for change.

Week 33: Why we need more reason and consensus, and less grandstanding

Housing affordability is one of our society’s most pressing issues, but has unfortunately — and predictably — become overly politicised as Election Day nears.

Week 32: Support for the arts and an event bonanza

Many in our community believe that Australia's arts sector needs more targeted, generous support - including for the SBS and ABC.

This weekend, we commemorate our Anzacs, who so bravely served our nation.

This week, I announced my plan to bring to Parliament a Cheaper, Cleaner Transport Bill to reduce pollution from our cars. I've consulted extensively with policy, industry experts and consumer groups to develop this plan, which will align Australia with international standards, and bring us a little closer to meeting our emissions reduction goals.